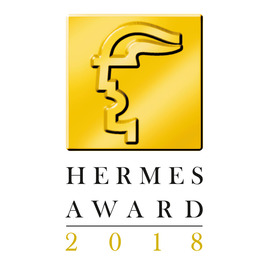 Alpha Laser is thrilled to announce it has been nominated for the 2018 Hermes Award, one of the world’s most prestigious and highly-coveted technology honors. The yearly prize is a joint effort from Deutsche Messe AG and the Hannover Messe industrial technology fair in Hannover, Germany, and recognizes a product which distinguishes itself with outstanding technological innovation. As Deutsche Messe AG wrote in its press release: “If you make it into the Top 5 with your solution, you can count yourself among the world’s most innovative companies.”

The Alpha Laser nomination acknowledges their AL-ARM mobile laser welding system for flexible repair work, which helps users simultaneously observe the welding task and its environment by utilizing 3D visualization. This is achieved by way of pass-through 3D laser protection goggles, which display the surrounding environment and welding task simultaneously.

The welding area is enlarged for better accuracy and precision, and process-relevant data, such as the crosshair, is superimposed on the field of vision. The device’s laser beam is triggered by an ergonomically-designed handpiece, which affords flexible and safe operation. Laser safety is built into the design of the device, with integrated material recognition technology permitting welder operation only when the handpiece is placed on the workpiece. This helps avoid the uncontrolled emission of direct laser radiation.

Hermes Award nominees are selected by an independent jury overseen by Dr. Wolfgang Wahlster, who chairs the German Research Center for Artificial Intelligence (DFKI). Five companies have been nominated for the 2018 Hermes Award, and each of the five solutions developed by these firms will be presented on April 22nd at the formal Opening Ceremony for Hannover Messe. The winner will then be announced by Anja Karliczek, Germany’s Minister for Education and Research.

The winner of the Hermes Award will be announced at the opening ceremony of the Hannover Fair on April 22, 2018. Follow our page for updates!

About Alpha Laser US

We are experts in laser engineering... ask us anything!